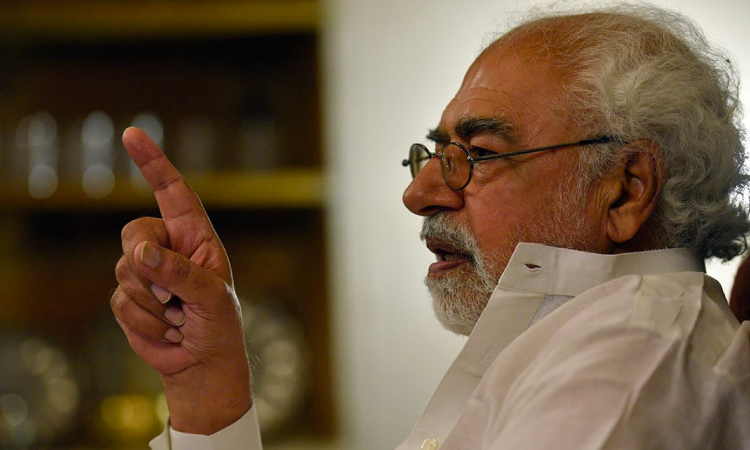 Senior writer and columnist Ayaz Amir got attacked in Lahore on Friday night by unidentified assailants.

Ayaz, who worked for a regional TV station, got attacked while he was traveling from his office in the provincial capital to his house. They assaulted the senior columnist, and took his things, including his phone.

He said in a Twitter post that unidentified thugs attacked him. Slapped him, tore his clothes, and stole his phone.

He said in another tweet that they were cowards. If they had been courageous, would have stepped forward.

What was His Mistake?

He declared that his sole mistake was speaking the truth. And promised to keep doing so in the future. "I appreciate your help. We must speak the truth and associate with the truth, as Allah has instructed.

Six people abused us as soon as we left the office because a car obstructed our path, according to Ayaz, who was speaking through his close friends.

Soon after the incident, SP Civil Lines Raza Safdar Kazmi went to the private TV station. Amir works for and spoke with the senior journalist to get more information about the assault.

Police Give Surety to Find Attackers

The police officer gave the journalist the assurance that they will find the unnamed attackers. And apprehend them as soon as possible.

After learning about the event, Punjab Chief Minister Hamza Shehbaz requested the police chief's report. And gave the law enforcement officials the go-ahead to ensure the quick capture of those responsible.

The attack on the senior journalist was also denounced by Prime Minister Shehbaz Sharif. He also asked the Punjab Chief Minister to call for a high-level investigation into the event. He also expressed condolences for the journalist who got hurt.

Imran Khan, a former prime minister and current chairman of the PTI, also denounced the violence. Against the prominent journalist today in the "strongest terms." With violence and fabricated FIRs filed against journalists, opposition leaders, and ordinary citizens. Pakistan is sliding into the worst type of fascism. The State turns to violence when it loses all moral authority, he remarked on his official Twitter account.

Concern was also expressed by President Dr. Arif Alvi on the assault on veteran journalist and commentator Ayaz Amir. According to a statement released by the Presidency. "Incidents of violence against journalists run antithetical to democratic norms and freedom of expression."

The president also commended the relevant authorities. To quickly file charges against the offenders.

Ayaz had just left a Pakistan Tehreek-e-Insaf (PTI) seminar. On purported "regime change" conspiracies when they attacked him.

The renowned journalist attacked former premier Imran and other influential figures. During his speech at the seminar and blamed them for the economic and social problems of the nation.

You're trying to emulate Che Guevara from power. Be sure to learn from your errors. At the seminar, where the ousted premier, Imran Khan, was also present, Ayaz had declared, "You turned the country over to property sellers.

He tweeted a video of himself speaking at the "Regime Change Conference" and stated, "We have to protect our country from 'property dealers'."

The assault on senior journalists and former lawmakers denounced Ayaz by the Human Rights Commission of Pakistan (HRCP). As "another heinous crime aimed to muzzle independent voices." HRCP demands an investigation and the prosecution of those found accountable for this act.

Everyone is describing the attack on the seasoned journalist. As "shameful and condemnable" by the anchor Kashif Abbasi. The terrible part is that nothing will happen. Because people have an idea that [unknown persons] will continue to be unknown.

Another journalist, Kamran Khan, responded to the assault by saying. "Better to outlaw free speech through a state edict than to beat people exercising the right. To free speech guaranteed in the Pakistani Constitution into silence."

'People with criminal backgrounds have also registered fraudulent first information reports (FIRs). Against many journalists for questioning so-called regime change operation." According to the host of prime time current affairs program Arshad Sharif. Was Ayaz Amir attacked by criminals after his historic statement on the "Regime Change Operation"?

According to Fawad Chaudhary

Fawad Chaudhry, a former minister of communication and current head of the PTI, claimed. That attacks on journalists had increased since the "imported government" took office. We call for a thorough investigation into the situation; to tolerate dissent.

Imran Riaz Khan, the anchor of Express-News, has been the subject of four first information complaints (FIRs). In separate Punjab cities for allegedly defaming public institutions.

In accordance with the provisions of the Pakistan Penal Code (PPC) and the 2016 Prevention of Electronic Crime Act. They renewed cases in the police stations of Gojra, Jhang, and Gujranwala.

The complainants claimed that Riaz had tarnished the reputation of the state institutions in the same FIRs.

police departments across the nation against some journalists. Connected to private TV stations since May 18. Filed numerous first information reports (FIRs), which begin an investigation

Following the election of Prime Minister Shehbaz Sharif by parliament on April 11. Following the ouster of former premier Imran Khan in a no-confidence vote. There has been a flurry of investigations into the physical, legal, and internet harassment of journalists.

PM Shehbaz stated in a tweet on May 4 that the new administration was "totally committed to freedom of press & speech.

The numerous FIRs allege that the four journalists. Including Imran Riaz and Arshad Sharif, who violated the Pakistan Penal Code (PPC). By criticizing government institutions in their reporting. And in an unspecified number of social media posts. These violations include aiding a mutiny and publishing statements that cause a public commotion.