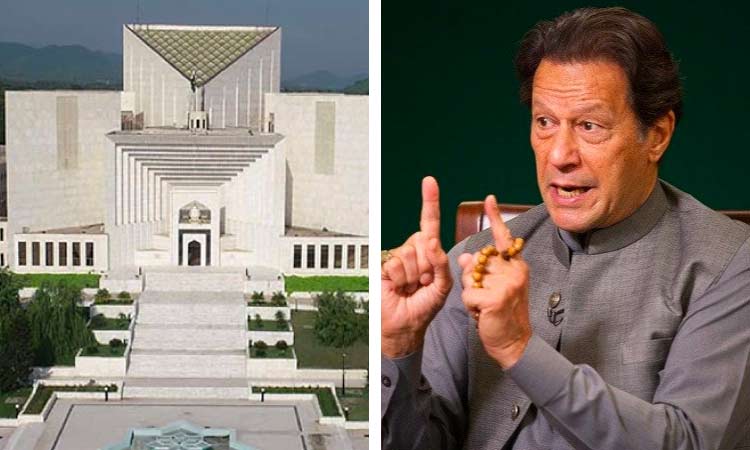 Justice Ijazul Ahsan, of the Supreme Court (SC), observed Friday that Imran Khan, Chairman of PTI, filed a petition against the amendments to National Accountability Ordinance (NAO) 1999. This petition raised questions of public significance and met the requirements of Article 184(3).

On its objections, the apex court's registrar's offices stated that the petitioner hadn’t highlighted the matters of public importance involved in the enforcement of fundamental rights guaranteed by the Constitution to directly invoke the jurisdictional authority of the Supreme Court under Article 184.3.

"I believe that the petition prima facie fulfills the requirements of Article 18(3) of the Constitution because the same raises questions about public importance with regard to enforcement of fundamental right conferred by chapter I of Constitution," reads a six-page written decision by SC judge Ijazul Ahsan. He overruled the objections of the registrar's office regarding Imran's petition to stop the recent changes in the National Accountability Bureau (NAB).

Justice Ahsan heard the appeal within his chamber. Khawaja Haris, a lawyer, appeared for the deposed premier.

According to the order, the appeal was granted and all objections from the office were overruled. It stated that the [registrar] office was directed to number the constitution petition, and set it for hearing before the appropriate court bench after receiving the necessary orders from the Chief Justice of Pakistan.

It was also stated that prima facie it seemed that. All the necessary ingredients for entertaining a petition under Article 184(3) were met.

"I agree with the argument of the learned counsel of the appellant that. If all questions of maintainability are raised, the court has the jurisdiction to rule on them." Haris' arguments were transcribed in order.

Counsel stated that the petition raised questions not only of great importance but also involved the fundamental rights of Pakistani citizens. The grievances were applicable to all holders of public office at the Centre as well as in provinces. This includes ministers and members of the cabinet as well as the prime minister of Pakistan and their close associates.

"Therefore this court is [the] best forum for adjudication upon legal proposals raised therein." Counsel also referred back to the SC judgment in the NRO case as a basis for his assertions.

Four seats are currently vacant at the apex court. Several judges are absent from the bench this week. PTI lawyers expect that the petition will be resolved in the following week.

They think that the composition and size of the bench will play a significant role in this case. The petition names the Federation of Pakistan, through its Law and Justice Division Secretary, and the NAB through the chairman as respondents. The petition stated that the court could very graciously declare that the amendments made to the National Accountability Act 2002, in so far that they substitute section[s] 1, 2, 4, 5, (c)(e) (q), and (s), 6, (in so far it empowers the president as the appointing power for the NAB chair), Section 9, (a), (vi), and (d), and further substitute the words 'National Assembly' and 'Senate' in place of President in Section 23D.

According to the petition, most of the amendments were "person-specific". So NAB should be asked for details about all cases that involved prominent and influential public officials. Particularly those relating to cases involving offenses of owning wealth beyond known sources of income or misuse of authority.